I know I am about two years late to the 2048 Clone Wars, but I finally got around to finishing my variant, 2048 Chess.  Originally I wanted to have multiple chess pieces on a larger 2048 board.  What I ended up developing was simply the kings.  The gameplay doesn’t lead to terribly interesting strategy.  It’s ultimately a game of button mashing and luck.  Whatever, I’m calling it done: http://danielbank.github.io/2048-chess/.

Making a GitHub page for a forked repository that already has a gh-pages branch:

My biggest hurdle in finishing this project was when I attempted to view the GitHub page for the repository. GitHub was overriding the game’s index.html with an automatically generated GitHub page.  I found this incredibly useful StackOverflow question for fixing that problem.  The prescribed steps were to: 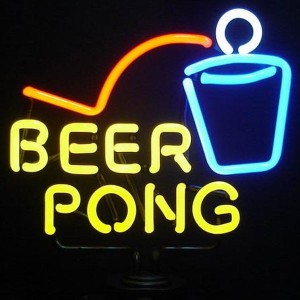 Beer Golf is a game played with ping pong balls, plastic cups, and beer.  It is played by my friends and I as an alternative to Beer Pong, another popular drinking game that we all enjoy playing.  With Beer Golf, your entire household becomes a golf course where each “hole” is an opportunity to drink.

Ping pong balls for all players

* Update: My friend assures me that the maximum number of players is four.  Not being a golfer, I was unaware of this Pace of Play rule.

Icosahedron is variation of the game Scattergories by Hasbro.  It is a fast-paced heads-up style game where winning involves wit, luck, and knowing your audience.  The game is called Icosahedron because of the twenty-sided dice which is used to play it.  The idea for the game originated when my friends and I were bored on a Friday night and were looking for a new game to play without going out to buy one.  Icosahedron has since become our preferred game because it is quick, easy-to-play, and suitable for a wide variety of players.

A Scattegories dice (the Icosahedron).

3+, it’s best played with an odd number of players

If you plan to consume alcoholic beverages while playing this game, the additional punishment rules are simple:

If you need help thinking of category ideas (beyond those that you might find in the regular game of Scattergories), below are some category ideas:

– Elements of the periodic table

– Parts of the human body

People who attempt to use the following categories should be rightly boo’ed:

– What letter am I thinking of?

Thoughts and Musings by Daniel Bank

My name is Daniel Bank. I am a software engineer with a background in physics. My primary interests are mobile and web development, as well as automation. My hobbies include traveling, scuba diving, playing music, writing, learning about mythology and history, and playing games.